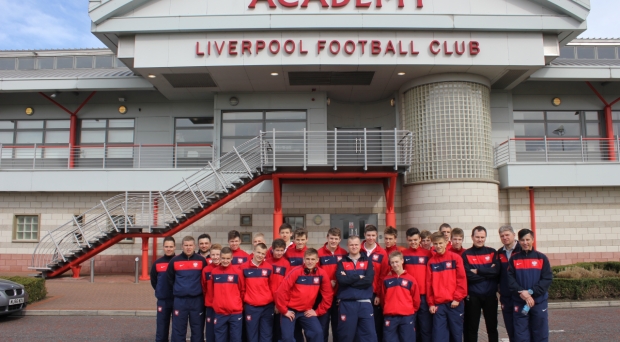 The Polish U15 team, staying at a training camp in Wales, on Wednesday - at the invitation of Liverpool FC - went on a tour around the training facilities and Anfield stadium. "We had training on the well prepared pitch, later we visited the stadium, players' locker rooms and the pitch," reports Maciej Chorążyk, the team manager of the U-15s.

Bartłomiej Zalewski's team defeated Wales 3-1 in Rhyl on Tuesday. On Wednesday, we were invited by the Liverpool FC authorities to the club's training facilities and the famous Anfield stadium. - We took advantage of the break between matches against Wales and happily went to Liverpool. We had regenerative classes on excellently prepared pitch. Next to us, the Liverpool U-21 team trained. Later, we went to visit Anfield stadium. We had our own private guide. We were in the locker room, on the pitch, in the tunnel and the briefing room, where the Premier League club coaches stay every day. We listened to the famous club anthem - 'You'll Never Walk Alone'. We were impressed, even more because a few guys are fans of Liverpool. We were received with a warm welcome, thank you - recounts Maciej Chorążyk.

On Thursday at 6:00 pm Polish time, the coach Zalewski's team will play a rematch in Rhyl with their peers from Wales.