CompetitionsPolish CupNews[TOTOLOTEK POLISH CUP] What awaits us in the quarter-finals? Back

[TOTOLOTEK POLISH CUP] What awaits us in the quarter-finals? 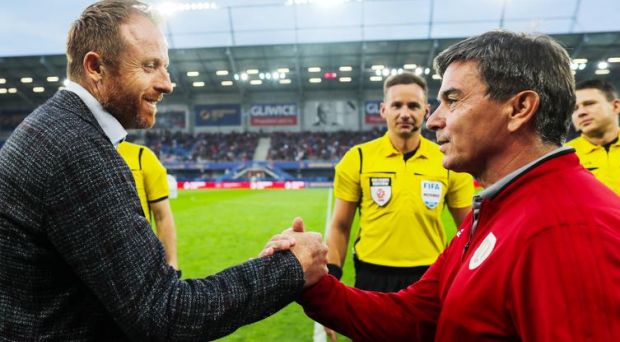 Why will the quarter-finals matches be a great competition for the first league teams still competing in the Totolotek Polish Cup? Will Piast Gliwice take advantage of the opportunity to take revenge for the two losses against Lechia Gdańsk in this season? What is the history of matches of Miedź Legnica with Legia Warszawa? Finally, will the matches in Mielec and Tychy be an advantage for the hosts, despite playing against rivals from the Ekstraklasa? See the review of the most interesting topics regarding the quarter-finals of the competition.

In the last two years, only one team from the lower league, Raków Częstochowa, has reached the level of semi-finals in the national cup. In the previous three seasons, there were more of them - two teams reached it twice; but this season, there is a chance for a real record. As a result of the quarter-finals draw, as many as three out of four pairs will be clashes between first league players and representatives of the Ekstraklasa.

The advance of all GKS Tychy, Miedź Legnica and Stal Mielec would be quite a sensation. So far, the draw did not bring the fans of the competition any great hits but it gave them hope for interesting stories. After all GKS and Stal already have teams from the Ekstraklasa on their schedule: the team from Tychy defeated ŁKS Łódź in the previous round, and the players from Mielec defeated Pogoń Szczecin. After a long winter break, especially for first league teams, this verification can be very interesting in comparison to the teams from the higher league.

Before the finals, the players of Lechia Gdańsk played their last match against Wełna Rogoźno Wielkopolskie and, winning 3-0, advanced to the second league. A few days later, they went to Piotrków Trybunalski and, in front of 16,000 spectators, they... won the Polish Cup. Sounds abstract? And yet this is a true story; everything happened in 1983, and the opponent in the decisive match was Piast Gliwice, namely the opponent that the team from Gdańsk will have to face in the quarter-finals this season.

It was another reality, but to this day it remains one of the most beautiful stories in the history of the competitions. After all, the triumph led to Lechia's matches with Juventus (0-7 and 2-3), which resulted in fantastic memories and constitute a mine of curiosities, inspiration for reportages and books. Who knows if this is not a better story for the Gdańsk team than last year's victory at the PGE National Stadium in the finals with Jagiellonia Białystok!

It is difficult to speak of revenge for an event that took place ... 37 years ago and none of the players can even slightly remember. Therefore, it is worth mentioning Lechia's recent clashes with Piast: at the beginning of the season, the Gdańsk team won in Gliwice twice - first in the Super Cup and then in the league. The Polish champion's match with the defending champion of the national cup certainly does not need advertising.

Will Miedź defend itself?

The history of matches of Miedź Legnica with Legia Warszawa is not very long, apart from the Polish Cup in 2014 and two league matches in the last season. However, each time it was the team from the Lower Silesia that was defeated, losing as many as ten goals in these matches. In March, it is also the defense that will be the key for Miedź to make perhaps the biggest sensation in the competitions.

Why? Primarily due to the offence of Legia, which is the best in the Ekstraklasa; Alexandr Vukovic's players have already scored 36 goals, five more than the next team. Miedź, on the other hand, kept a clean sheet only twice in the last ten matches; it managed to lose as many as three goals to Odra Opole. That is also why after the end of the autumn round coach Dominik Nowak pointed to the need to improve the level of his team. "We do not deny that we still have a lot of hard work to do on many elements. I am aware that the round has to be scrutinised. We have to draw conclusions and determine a direction for this work to make the team play better," he said after the victory against Chrobry (2:0) in Głogów. The fact that they will start spring with... four matches in a row in their own stadium may be to their advantage. The third one will be with Legia in the Totolotek Polish Cup.

Once more in the Podkarpackie region

Lech Poznań players took a plane to Rzeszów for the round of 32 match of the Totolotek Polish Cup. It was similar before the match of the next round, which took place in Boguchwała with Stalowa Wola. The trip to the Podkarpackie region before the quarter-final will probably go similarly for the players of "Kolejorz", as they drew Stal Mielec. However, this may be a much more difficult challenge.

First of all, Stal plays in a higher league than the previous opponents. It is also doing much better than Chrobry Głogów, which was eliminated by Lech at the beginning of the competition in the national cup. So far, the score sheet of "Kolejorz" seems great – three victories without losing a goal – however, as a matter of fact, they did not present their maximum potential in any of the matches. Meanwhile, the team from Mielec is doing very well on their territory: this season, they won the greatest number matches (seven), they were defeated only once and lost merely eight goals. Szczecin Pogoń discovered the difficulties of competing with Stal when they lost 0-2 in Mielec at the end of October.

Another clash of friendship

In the previous round, friendly fans from Łódź visited Tychy, but there was no hospitality on the pitch as GKS defeated ŁKS in the round of 16. This time the fans of the team led by Ryszard Tarasiewicz will greet "friendship" fans – from Cracovia. For GKS, the quarterfinal is already a historic result, but it will be easier to improve this result at home.

Especially since they can count on their fans in Tychy. Almost 4.5 thousand of them appeared on the match with ŁKS, which was the fourth result of the quarter-finals. In the first league, the turnout of GKS fans is the third highest and amounts approx. to 3.8 thousand fans. Where does this result come from? You can search for reasons in the at-home scores of the team (only one defeat), but above all in their effectiveness: the average number of goals scored by the team from Tychy in front of its supporters is the highest at the second level of competitions (over 2.5).

For Cracovia, it will be the second away match in the Polish Cup this season. In the previous one, "The Stripes" were struggling with the second-league Bytovia and needed two goals in the last minutes of regular time and the extra time in order to advance to the round of 16. It was only in the round of 16, in a 2-hour match, that they managed to keep a clean sheet for the first time.