CompetitionsPolish CupNews[TOTOLOTEK POLISH CUP] Top eleven of the round of 16! Back

[TOTOLOTEK POLISH CUP] Top eleven of the round of 16! 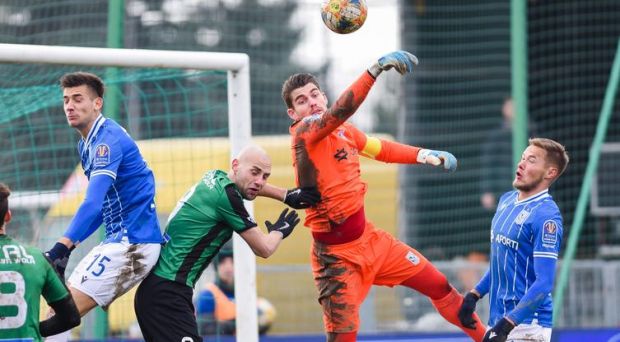 It is the time for the last choice in 2019, although the season with Totolotek Polish Cup does not end. The round of 16 provided a lot of excitement, created quite a sensation, and two matches ended in penalty shootouts. Which of the players competing in this round earned a place in the top eleven according to "Łączy Nas Piłka"?

It is hard to believe but it was in the match against the second league Stal Stalowa Wola that Mickey van der Hart scored the most interventions this season. It is to him that Lech Poznań owes both the clean sheet and no extra time, as well as no further problems in the promotion to the quarter-finals. On a very difficult pitch in Boguchwała, he defended the shots of his opponents seven times, giving a show of his dedication when, in the confusion in the penal area, he threw himself under the feet of his rivals. In duels with the striker Michał Fidziukiewicz he definitely had the upper hand.

After this phase of the competition, solid players from the defensive formation had to be distinguished: David Jablonsky from Cracovia undoubtedly proved to be one. The Czech did not become a hero, but he took advantage of his penalty in the penalty shootout. He also performed a great shot from a distance in extra time. Moreover,  he won 13 out of 19 duels and 90% of his passes were accurate. The second in the top three defenders was Mateusz Wieteska from Legia Warszawa, whose balance of clashes is even more impressive. In the match against Górnik Łęczna had as many as 29 duels, 24 of which he won, including six successful attempts at reception. The formation is completed by Marcin Biernat, who sent the ball to the back of the net of ŁKS's goal in the only victory of the team seeded lower than its rivals. However, it would be a mistake to distinguish GKS Tychy's defender only for the 2-0 goal – he won 10 out of 11 duels and only two out of 37 passes were not accurate.

With such a solid defence you can play more offensively on the second line. This is proved by selected central midfielders. Tomasz Makowski from Lechia Gdańsk is a real discovery of this year's edition of the Totolotek Polish Cup. Lechia owes its spectacular return from 0-2 in the most interesting match of this phase primarily to his shot from a distance. Moreover, the 20-year-old had three successful dribbles, five reception attempts and won 60% of the duels. Next to him in our team there is Walerian Gwilia from Legia Warszawa, who had two key passes with Górnik Łęczna but also strongly supported the team in the defensive phase (three slides). In front of these two, moved from the wing, there is Gerard Badia, whose statistics in terms of goals scored should be even more impressive. The Spaniard scored both goals for Piast Gliwice in a match with Legia substitutes, but did not take advantage of the first of two penalties.

More... normal wingers will fulfill the wing-back roles. On the left side Tymoteusz Puchacz from Lech Poznań, who opened the scoring in the match with Stal with a beautiful lob. Lob which was actually a cross. This was not his only attempt in this match; moreover, he was responsible for the greatest number of key passes (five) and dribbles (eight). Mateusz Mak from Stal Mielec, who was playing on the right side, also scored a goal. This goal turned the fate of the tough match against Błękitni in Stargard and enabled the promotion to the quarter-finals.

In the last weeks, the performance of Jose Kante from Legia Warszawa has been quite satisfactory. Between the league matches with Korona Kielce and Śląsk Wrocław he also sent the ball to the back of the net in a match against Górnik Łęczna. And what a goal that was! After a long pass from the depths of the field, he first won a header duel, and then, following the next long pass, he received the ball with his chest, passed the goalkeeper and shot at the empty goal. A real masterpiece worthy of highlighting. The goal scored by Flavio Paixao was not as spectacular, because he took advantage of a penalty kick in a match against Zagłębie Lubin. However, the Portuguese worked hard in this match and gave the signal for attack in the second half. He not only scored a goal but also an assist on Lukas Haraslin's goal. In addition, he had five shots, four dribbles and as many as eight reception attempts. Therefore, it can be said that he really earned his place in our team, both in offence and defence.