AssociationNewsSummary of the "Startups in the Game" programme Back

Summary of the "Startups in the Game" programme 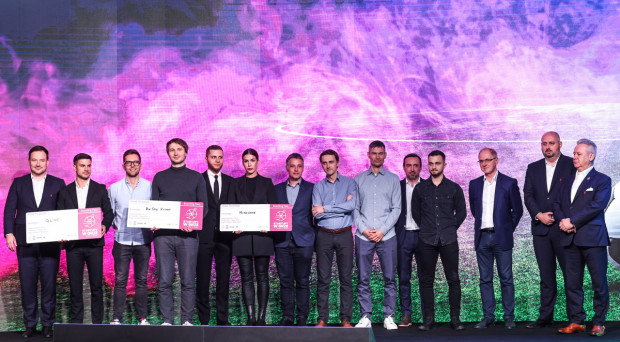 The final gala summed up the pilot edition of the "Startups in the Game" programme called "Road to Qatar". A jury of representatives from the worlds of sport, technology and business selected three winning teams out of the 11 teams that tackled the challenges set by PZPN.

During the final of the "Startups in the Game" programme, each team had to present their solution in three minutes. The jury, which - in addition to the representatives of PZPN - also included NASK (Polish Research and Academic Computer Network) and Rebels Valley experts and programme partners from the Polish Agency for Enterprise Development and Wirtualna Polska, faced a difficult challenge. Both the evaluating experts and the audience gathered in the studio emphasised the high quality of the speeches and the level of business appeal. The projects presented included solutions supporting coaching and medical staff, as well as social applications supporting the development of young talents.

'The quality of the projects presented during the final event and the applications received shows the value of Polish companies combining football and technology,' said Łukasz Wachowski, Secretary General of PZPN. 'We believe that the pilot edition of the "Startups in the Game" programme is the first step to introduce Polish startups to the world of sports. I am also pleased with the involvement of people associated with football who were ready to share their experiences from stadiums and pitches with the entrepreneurs,' added Wachowski.

'We expect innovators to provide business solutions that can be supported and developed by providing an element of knowledge that we are developing at NASK from the scientific point of view and by providing necessary infrastructure. Our doors are open to start-ups wherever our support may be needed,' declared Wojciech Pawlak, director of NASK.

Ultimately, after a lively discussion behind closed doors, the jury decided to award tickets to the following startups: Higgsone, Qlac, and Respo.Vision. Each of them will be able to send two representatives to Qatar, who will be given the opportunity to present their businesses, through the PZPN's network of contacts, to the key personalities in world football. Special awards were given to two more startups, FC.App and Smarter Diagnostics, which were invited by PZPN to join the pilot cooperation with the association.

'In fact, there could have been up to twice as many winners here. Such projects would have been the envy of international technology conferences. This is enormous potential that we need to exploit,' revealed Wojciech Strzałkowski, President of the Management Board of PZPN Invest S.A., a company established to support the technological development of Polish football. 'We are already thinking about the activities for the coming year, the aim of which will be to support the creation and development of sports start-ups even more strongly. All the more so because the reviews of the pilot programme that have reached us are really encouraging," stressed Wojciech Strzałkowski.

Higgsone - a career-threatening injury is every football player's nightmare. Higgsone focuses on a solution that uses smart clothing technology to monitor key biomechanical parameters and track the performance of the athlete's body.

Oxymotion/Qlac - the company's solution addresses the issue related to the non-invasive monitoring of lactic acid levels in muscles. As a result, the coaching staff is able to prepare effective training tasks and manage the team line-up during a match.

ReSpo.Vision - thanks to the use of artificial intelligence and machine vision, the startup helps teams acquire and use data related to the events taking place on the pitch.

"Startups in the Game" is the first programme in Poland to support the collaboration of young technology companies with the football ecosystem. This joint initiative taken by PZPN Invest, the Rebels Valley advisory boutique and the NASK National Research Institute will allow the most ambitious companies to face the challenges in the world of football, prepared by experts and potential audiences.