AssociationNewsSensation on a global scale! Must see! Back

Sensation on a global scale! Must see! 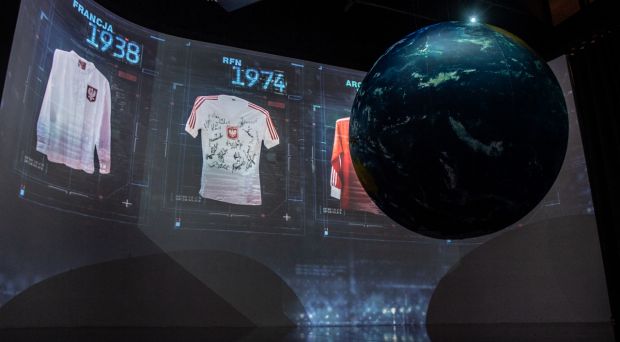 PZPN introduces us to the incredible history of Poland at the World Cup using the latest technologies. It is the most technologically advanced exhibition dealing with football history in the world. You can visit the "Poland the the World Cup" exhibition at the Norblin Factory in Warsaw until the end of the year.

Memories related to Poland's beloved sport will come to life thanks to incredible visual effects achieved through the use of latest technologies as well as cooperation between Art of Football Sp. z o.o. and the PZPN Library of Polish Football, which provided all materials. The exhibition is organised by the Polish Football Association.

To play in the World Cup is the dream of any footballer. And to bring a trophy from the tournament is a pass to immortality. The White and Reds made the top three twice: silver medals (then awarded for third place) were won by the "Eagles" led by Kazimierz Górski in 1974 and by the team led by Antoni Piechniczek in 1982. It is not only the players who score spectacular goals, but the entire teams that go down in legend, as only team play makes success possible.

Thanks to the latest technology, when you visit the "Poland at the World Cup" exhibition, you will have the opportunity to waddle in the rain with Ernest Wilimowski during the legendary match against Brazil, defend penalty kicks together with Jan Tomaszewski and shoot spectacular goals just like Grzegorz Lato at the tournament in West Germany. You will be able to dance the Argentinian tango together with the squad led by Jacek Gmoch or get tired under the Spanish and Mexican heat with the team led by Antoni Piechniczek. But being a fan also means being able to accept defeat, which is a part and parcel of any sport. For this reason, the exhibit also includes a section recalling Poland's three appearances in the World Cup in the 21st century. The opening match, the all-or-nothing match and the match for honour... We believe that things will be different in Qatar. We will at last break the series of disastrous performances, and the team led by head coach Czesław Michniewicz has shown, for instance during the play-off against Sweden, that these hopes are not baseless. Both the glorious and the less glorious moments of Polish football are the subject of this exhibition. It is a one-of-a-kind event.

"This exhibition is truly unique! Every fan should visit it and go on a sentimental and emotional journey through appearances of the Polish national team in the final tournaments of the World Cup. The Qatar World Cup provides an excellent opportunity to do so. Both for the older and the younger fans. Technology-wise, we are entering the 22nd century. This is the first such project in the world," stresses Łukasz Wachowski, Secretary General of PZPN.

This colourful and emotional exhibition, directed by Magdalena Mikołajczyk (with Piotr Sikora and Marcin Śmigielski acting as the producers), is an opportunity to once more experience Poland's eight World Cup appearances, discover their meaning (not only in terms of sport!) and feel proud of the players who wore the eagle on their chests. And to keep the excitement with you for longer, we encourage you to take a selfie with the Polish national football team.

The exhibition is organised by the Polish Football Association, and the main media patrons are the PZPN Library of Polish Football, ŁączyNasPiłka.pl and TVP Sport. Media patronage is also provided by Radio Eska, Onet, "Przegląd Sportowy" and "Super Express".